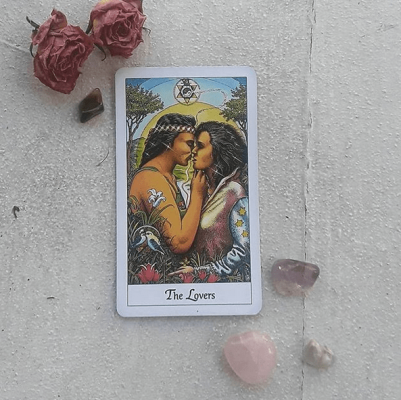 So many symbols to unpack in this representation of this card! The Lovers can represent Love, but it often represents the idea of choice. We must choose between two paths, which could involve Love. Our goal in making our choice (and in finding love) is to strike a balance. So many of the cards focus on the idea of balance in our lives.

Let’s start examining the symbols in this card. The six-pointed star, or Star of David, is used in many traditions although it’s know best known as the symbol for Judaism.  It is often seen as a magical sign. The upside down triangle represents water and feminine energy while the upside triangle symbolizes fire and masculine energy. Combined, they aim to strike a balance between these opposing elements and energies. Although it has six points, it is associated with the number 7 because the center counts as a point. The number 7 signifies intuition and inner wisdom.  Additionally we have another symbol that combines masculine and feminine energy in order to denote balance. The yin-yang symbol represents femininity and masculinity, Shadow and Light, growth and the journey to growth.

“I cannot speak highly enough of the experience of receiving a reading from Lizz! Those who seek a clear and compassionate perspective on their situation will be delighted by her offerings. Her beautifully written reading reaffirmed my feelings about an ongoing major life change I set into motion several months ago, and offered helpful advice that is highly relevant to my life at present. I also loved the crystal suggestions that she paired with the cards’ messages. Thank you, Lizz!” – Laura, Texas

“Lizz gave a very clear and concise reading without me giving her any details. I simply asked for a general reading and she gave me so much information and insight. She hit the nail on the head and answered the question my soul wanted direction for.

“Lizz puts such thoughtful sacred energy into her readings. She has a sensitivity that allows her to get to the heart of the situation.” – Lisa, Missouri

“I had a fantastic reading, and I really appreciated the analysis and explanation, plus all the answers to my follow-up questions. It all felt very personalized and I truly appreciate the insights.” – Michelle, Michigan

Please use the contact form on the About page to discuss how readings can make your party or event more memorable.

Need a look ahead? In person, zoom, or video recordings are all ways we can connect to answer your burning questions! Link in bio #tacomatarot #tarot #tarot365 #tarotreading #tarotreadersofinstagram
2023: take me down to Paradise City
Client readings bring joy and I love connecting with people 💕

love & abundance to all 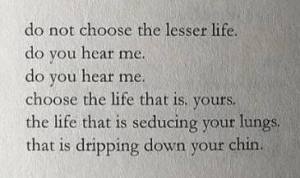 links that I love